From the Resystance website:
We are in danger from unknown forces that conspire against us. The air you breathe, the water you drink, the land beneath you is no longer yours. Perhaps it was never yours. There is no security left in this world. We must band together. Resystance Leaders will be communicating shortly to reveal the danger and train you. History has much to teach. We must fight back, but great danger lies ahead. Be careful. Be safe. Be anonymous. Resyst.

Sounds mysterious, and it is!

I was initially not sure what to expect from The Resystance. The website seemed to hint at a shadow war that was on the horizon, with agents from both sides battling for an unknown cause. An audio file we received after signing up also promised that The Resystance itself would be contacting us in order to train us to fight against those endangering our world. We received the promised correspondence within a suitably plain box stamped with the Resystance logo, cementing the aura of mystery that surrounds the experience. 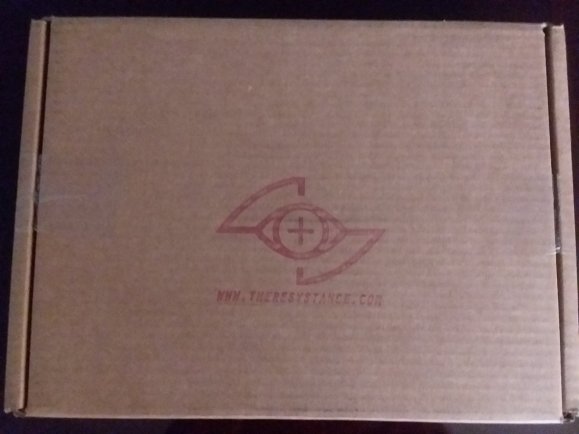 When we began our training mission, we found ourselves transported to Prohibition Era America! We were given a letter of introduction from Resystance leaders as well as a few intriguing items and a newspaper to get us started. Within the box there were a couple of envelopes that we were to keep sealed until we reached a certain part of the story, and this functioned as a great way to dole out new pieces of the story as well as more props and puzzles! It was always clear when we had solved the puzzle correctly and were allowed to move forward with the envelopes, providing a more structured progression to the box’s game flow. This was a great and highly original way to keep our focus on certain parts of the game, preventing the sometimes mercurial nature of some subscription boxes from infecting the experience. Puzzles were masked well, but enough direction was given that we did not feel lost in any way, and once we had found the threads we needed, it became clear what our goal was through several satisfying ah-ha moments! The props themselves were high quality, and extremely enjoyable to use, and the newspaper especially was an amazing treat to work through. As this was only the second box produced by The Resystance, I’m looking forward to seeing the items and mysteries in store for the upcoming boxes!

We received one set of items at the outset that felt out of place, which probably would have made more sense had it been inside one of the progression envelopes. This was later explained to be a minor shipping error, which is completely understandable. The training mission set up is an interesting way to start the storyline, but we didn’t get any insight into the meta-narrative just yet, beyond a audio introduction when we signed up, which was a slight disappointment. Hopefully going forward we’ll get a clearer picture of what lurks in the shadows!

The enigmatic nature of The Resystance was a great set up, and though I expected a more cloak and dagger storyline, the time-hopping training adventure was engaging and presented a great challenge! I look forward to seeing how the storyline develops, and how our training might develop into the meta-narrative and recommend those intrigued by a long term mystery to give this one a shot! Use the promo code ESCAPERA for 10% off and join the Resystance here!