The ominous shadow of Bleak Lily has clouded the public’s opinions of Indigo House for the past hundred years, turning it into a paranormal hotspot frequented by all manner of supernatural enthusiasts.  A local ghost story rooted in bits of truth, the tale of Bleak Lily is actually the tragic story of Lily Abernethy, one of the estate’s original owners who took to haunting the house after a suspicious and untimely demise.  In the years after Lily’s passing, numerous people have died on the grounds of Indigo House, and although there is never anything to prove that the ghost of Lily Abernethy is to blame, people still whisper that the bloodshed is her handiwork.  The Van Burens bought Indigo House from the Abernethy family around the turn of the 20th century and have done their best to shake off the curse of Bleak Lily.  However, the rumors started up again when the matriarch of the family, Hilda Van Buren, was found dead in her bed.  Was Mrs. Van Buren’s death from natural causes?  Did Bleak Lily claim another casualty?  Or is there something else sinister at work?

There were even more items than usual included in this box, which was great to see! More puzzles are always welcome, and the quality of props remained a high point of the box. I love supernatural horror the most, so the theme was also a big draw for me with this one! 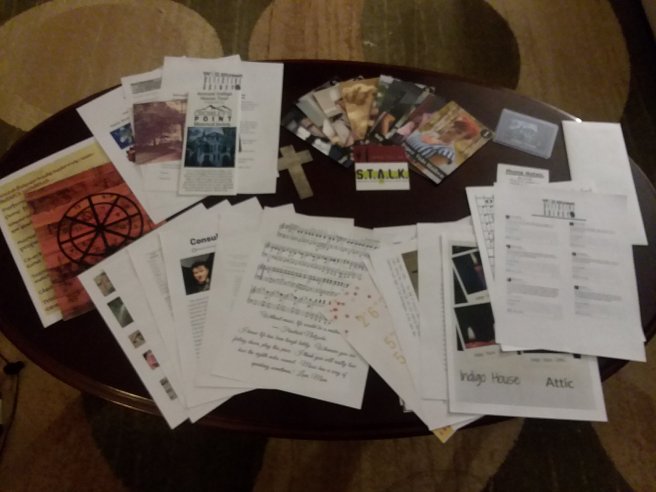 Only the spookiest of clues to be found inside!

The sheer amount of puzzles and information included provided an even more expansive and immersive experience than usual, and we loved poring over the story! All the bonus items were integral to the investigation, with no fluff, which was fantastic to see. Deadbolt always does an amazing job with world-building, and The Haunting of Indigo House is certainly no exception to that! Further code-breaking is included, per usual, but this box mixes it up well by providing more varied types of deductive and layered enigmas to solve. Most suspects can be eliminated more conclusively in this box, and the motive is quite a bit clearer than it previously was in Asylum, which is a great step in the right direction. Working with a variety of different consultants in this box allows for a nice change of pace allowing us to branch out from the usual case reports. The online component of this experience is expanded greatly, and interweaves within the story quite well. The non-linear nature of this box allowed for us to jump between puzzles whenever we were stuck, and kept the game flow from stalling out.

One particular puzzle was mostly solved by us, but we needed to decipher the initial bit, and were ultimately unable to. This led us to use the hints for the first time, and while the hints were good overall, they didn’t help us with our specific problem, so we still aren’t 100% sure what the puzzle was trying to say. Also, there were some logical leaps we hadn’t experienced before with a Deadbolt box due to the nature of the supernatural mystery, and while that still led to an immersive experience, it made solving certain sections of the mystery a bit more vague than we are used to.