It’s been over a year since the psychopath known as Nero last threatened the citizens of Thornmire County.  A villain with his own moral code and twisted sense of justice, Nero doled out punishment on those he deemed guilty, mimicking his namesake, the Roman Emperor Nero, who was known for his cruel and unusual methods of torturing those who crossed him.  No one had seen or heard from him until earlier today when you received a curious box from Nero, threatening the city of Hampstead with the release of a highly communicable airborne toxin that will likely kill thousands of innocent people if not contained.  Nero, however, enjoys the thrill of the chase and the challenge of a worthy opponent.  He has provided a series of puzzles that will allow you to pinpoint the location of the toxin as well as the means to disable the bomb that will disseminate the chemical compound into the atmosphere.  He has allowed you and the other members of the Will Street Detective Agency 72 hours before the population of Hampstead is wiped off of the map.  Oh, and one more thing.  Nero has given specific instructions not to contact the police, the CDC, Homeland Security, or any formal law enforcement agency, threatening to detonate the bomb early if his instructions aren’t followed.  This means your wits and detective skills are the only thing that stands between the town of Hampstead and a bloody, brutal demise.  Discover the secret behind Nero’s wrath and do whatever it takes to save the citizens of Hampstead.

There was a time when we first started reviewing mystery boxes that we would pop them open and solve them on the couch with everything laid out on the coffee table. A simpler time, with smaller, quaint mysteries about someone getting Murder(ed) in 3B. Nowadays though, most of the mysteries we solve have gotten so much bigger, but we aren’t complaining about the sheer number of devious puzzles to solve! The Wrath of Nero is no exception. Boasting an enormous number puzzles, similar to the size of The Haunting of Indigo House, we were in for quite a night of puzzling. About 3 hours to be exact! 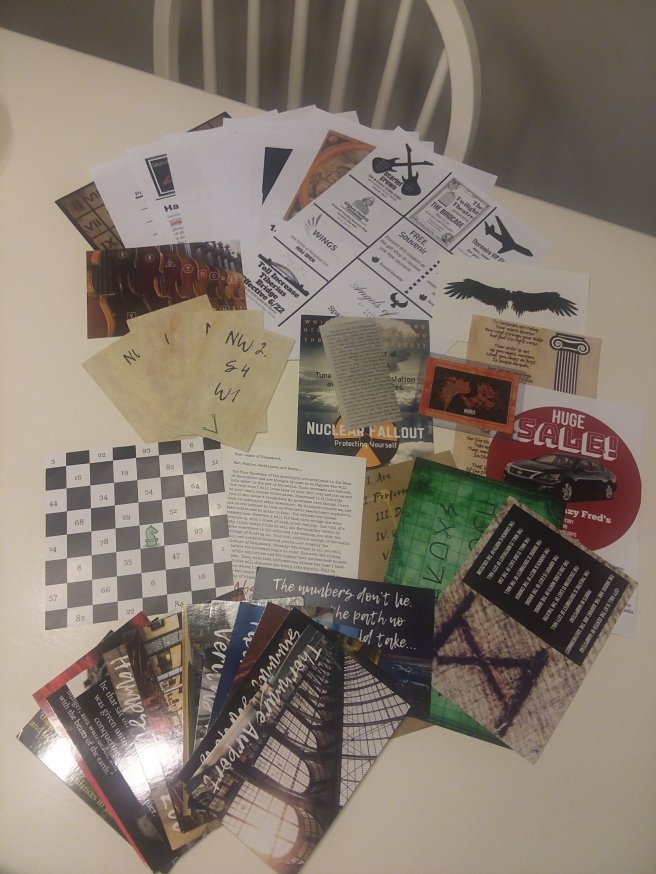 The many puzzles of a madman!

The Wrath of Nero has a lot of new ideas, and mixes up the usual formula of Deadbolt to mostly great effect! It’s always awesome when a box tries something new, and it is obvious that the folks at Deadbolt have put a lot of work and thought in while developing this new experience. The new adventure pits you against a terrorist psycho intent on detonating a dirty bomb within the city, and swaps out the usual suspect cards for locations. The game also presents you with two goals, figure out where the bomb is, and correctly enter the defusal sequence before it goes off! The first half of the puzzles we solved were an excellent mix of decoding, logical connections and deduction, and fantastically developed enigmas. There’s a lot to go through, but most of the connections between items are intuitive and provide a wonderful ah ha moment when they are solved. The puzzles themselves also run the gamut of several different puzzling types, playing to the strengths of both members of our team in different ways, keeping us satisfyingly occupied and engaged with the mystery. There are also references to previous boxes within this one, which is a great easter egg for Deadbolt veterans!

The second half of the puzzles we solved started to get more frustrating. These puzzles involved much larger gaps within their leaps of logic, some of which, to their credit, did seem to come out of the mind of a lunatic. Unfortunately, we aren’t lunatics and had the hardest time figuring out if certain pieces of the box even *were* puzzles. Some were at the same time simplistic yet baffling, leaving us wondering why they would be the answer. Others contained multiple answers that could not be deduced with simple logic. Usually with Deadbolt boxes, there is a certain clarity and sureness of the solution when a puzzle has been solved, but many within The Wrath of Nero did not have this satisfying effect. The metapuzzle as well was unclear to us, and seemed to involve an extra step that just wasn’t there. This could have been alleviated had a certain bit of the puzzle been included in the box, rather than hidden online within the site. We didn’t find this until much later, as it isn’t referred to in the box, and seemed like a side hint when we did finally stumble across it. Having looked at it online, it really should’ve been included as part of the box, or at least mentioned. The story also wasn’t quite as deep as previous boxes. Where other boxes have developed the story from puzzle to puzzle, this one never quite got beyond what was included within the box. A definite step back after the excellently woven stories of The Haunting of Indigo House and Asylum.

The Wrath of Nero is not a bad box, quite the opposite, but doesn’t quite reach the caliber of Deadbolt’s other boxes, which are simply amazing. The Nero box shakes up the usual Deadbolt formula quite a bit, but some of the original charm gets lost in the jumble. While the new theme, multiple goals, and metapuzzle solving are a great addition, it all feels to much too soon, and ends up more muddled than we’d like. Nero is a great character, however, and it’d be great to find out more about him in the future! Maybe we can even visit him someday in the Saturn Hills Asylum! You should definitely check this one out if the theme interests you. As always, we’re looking forward to July’s new magical mystery! Join the Deadbolt Mystery Society here! Right now, you can get 30% off your first box with the Promo Code ESCAPE30! You can also see the rest of our Deadbolt Mystery Society reviews here!