Why’re they taking the cows?

Area 51, the mysterious Air Force base in Roswell, New Mexico, has been the epicenter of much speculation about aliens and mysterious sci fi technology for decades. You and your friends have found a way into the facility, but something seems off; it was just too easy to get inside! You’ve made your way to an abandoned looking office as soon as the facility goes on lockdown, and you’ll need to figure out what’s going on, and possibly save the world, before it’s too late!

We’d had a good time at Escape Artist, especially with their Yin and Yang experience, and to a lesser degree, their Hangover room, and we were ready to see what would happen when we broke into their version of Area 51! Upon entering, we saw that in the dark, there was a glowy alien hooked up to an IV, and no Men in Black around, so we got to searching the office for clues! 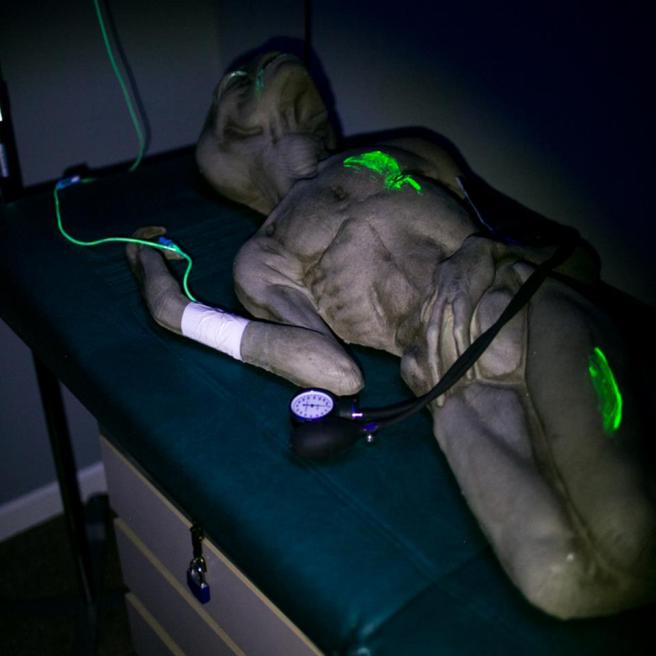 Area 51 was described to us by our game master as Escape Artist’s most difficult room, and while we didn’t find it overly difficult, it did provide a good challenge for our group of four enthusiasts. A mixture of logic, math, dexterity, and spatial reasoning puzzles kept us all entertained throughout this mostly non-linear adventure. This mix allowed each teammate to shine, and when one of us was stumped, the next could pick up the puzzling thread and run with it. The game flow worked well, and with the exception of a small search failure on our part, each puzzle led into the next seamlessly. Hints provided within the game were vague enough to challenge us, but not so obscure as to become a game of “guess what the designer was thinking.” Props around the room were fun to play around with, and added to the somewhat spooky sci fi theme.

Probably the lowest point to Area 51 is the ending. Unfortunately it is highly anticlimactic, and doesn’t lead to an exciting escape or huge revelation, as it mostly feels more appropriate as the end of a paper based puzzle hunt than an escape room. It is also incongruous with the entire reason you’re trying to figure out the puzzle itself, as it makes it seem as if the stakes are really high, and then completely falls flat onto a non sequitur. There are also a couple points at which props feel worn and overused, ready for replacement. The room itself is only of average set design, and really doesn’t feel like it would be on the inside of the mythical Area 51. The experience is very much based in early days escape room design, never quite cracking into new territory, so as enthusiasts, nothing blew us away. Finally, there are several groupings of locks that accept the same type of codes, requiring guess and check around the room until you find which one ties to the codes you find.

Area 51 is a classic escape room, and while it doesn’t exactly shine as brightly as Yin and Yang, it’s still a decently fun experience that reminds me of the online puzzle rooms of the 2000’s. As long as you’re not expecting a deep story or anything too technical, there’s an enjoyable run of puzzles to be found here. Beginners will definitely get more out of the experience, but enthusiasts looking for a more nostalgic adventure will have a good time as well, though it won’t blow your mind. You can book your time in Area 51 here!