It’s an older game, sir, but it checks out.

The Department has lost contact with their esteemed chemist, Dr. Hoffman! It’s up to you to discover his secret lab, deep within the New York subway tunnels, and find out what he’s been up to. The lab has a sophisticated series of security measures you’ll need to overcome however, including a sixty minute self destruct timer that has just triggered! Be quick, and find The Formula!

Though I tend to enjoy Exit: The Game a bit more, Unlock! has always been a close second to me, delivering exciting escape adventures within a compact deck of cards. Usually a great activity for my fiancée and I when we aren’t off on an escape room marathon, these games generally scratch the escape room itch for a fraction of the price. The Formula is one I’ve actually played a couple times. Once over a year and a half ago, and again after I’d forgotten much of the game and was looking for something puzzling to play around with. So there’s some replay value there, though you’ll have to wait around 18 months for that to apply in my experience.

The tools of escape.

The Formula can best be described as a basic introduction to the Unlock! series of escape games. This isn’t wholly a bad thing, however, as the game is intuitive to newcomers, and presents its challenge in a mostly straightforward way, like many early days escape rooms. The game flow is mostly linear, with non-linear parts, and can easily entertain a solo player or team of two. There are a couple nice stand out moments, including a few puzzles that contain multiple ah ha moments as you move from making the connection between items, to formulating the plan of action, to finally solving the conundrum and gaining your reward. The sense of progress is excellently gauged by the deck, and while the companion app keeps time for you, you can predict how far you have to go by the size of the deck, as well as the progress you’ve made with each subsequent room you uncover!

The companion app itself is excellent, and provides more than just a timer counting down from sixty. The included soundtrack, (which can be muted if it’s not your thing,) is appropriate and creates an environment of mystery to adventure to, and if you ever need a hint, they’re just a click away! The app will also give you some assistance with the much maligned “hidden object” portion of the game at regular intervals to ensure you’re kept on track, which is an absolute boon. Once you’ve finished, the game does not require you to destroy any components, so it can be passed to a friend as an added bonus! 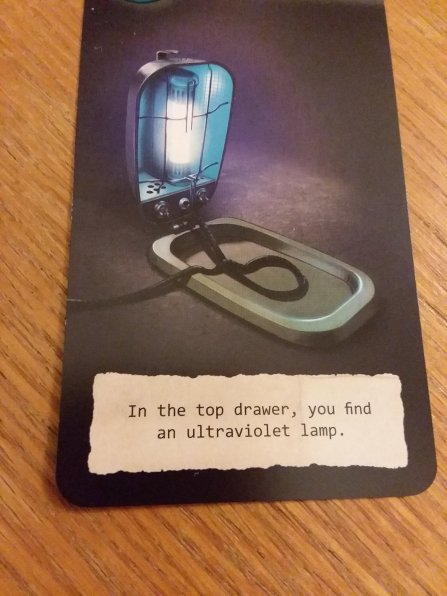 Black lights! Can’t get away from them, even in the home games.

Being a basic Unlock! game is a double edged sword, especially now that there are three more Unlock! sets that have released since this one hit the scene. If you’ve never played an Unlock! game before, The Formula will definitely be a fantastic introduction to the series, but if you’ve played one of the more recent entries to the series, you’ll definitely find that there has been a lot of innovation applied in recent years which is noticeably absent from this game. There are a couple of points that penalize the player for doing otherwise logical things, and it stings to have to press the penalty button and lose minutes off the clock for something that would be a quick and reasonable course of action in reality. Though innovative for it’s time, many of the included puzzles will have become old hat for veterans of the genre, and this one can easily be solved well under the prescribed hour. The hidden objects, while not the worst I’ve seen in an Unlock! game, are still rather annoying at times, at points feeling overly tedious to find rather than a puzzle in themselves. The way the game is set up, I definitely would not recommend any more than two players, and the recommended maximum of six is absolutely laughable.

Despite some glaring issues that have become more apparent with the passage of time, The Formula is still a fun way to kill thirty minutes to an hour solo or with a friend. New players will get a great intro to the series, but veterans may be better off with one of the more recent entries to the series, as the improvements made to the newest games are noticeably absent here. Set out to find the formula at your friendly local game store today! We bought ours at the ever excellent Gamer’s Armory in Cary, NC, check out their online store here!