Location: Select Royal Caribbean Cruises (We played on Harmony of the Seas)

Mystery, literally, on the high seas!

There are some puzzles you solve and there are some puzzles you ESCAPE! In the new and exclusive Escape The Rubicon, you will be transported to another world and another time. Collaborate with friends, old and new, as you attempt to find the hidden clues needed to solve a collection of puzzles that will eventually unravel the mystery of the Rubicon! With only 60 minutes of life-support, the suspense builds with every tick of the clock. The final seconds will decide your fate. Question: Will you escape? And if not, what then?

When we were planning our honeymoon, we decided we wanted to take a cruise. Knowing that there were escape rooms on some of the Royal Caribbean ships, I was definitely leaning towards one of those. Luckily, Harmony of the Seas is their biggest, and also contains a load of fantastic entertainment as well, including ice skating shows, Broadway musicals, and so much food. But we’re here for the escapes, so how was it? In a word, awesome. In a few hundred more words… 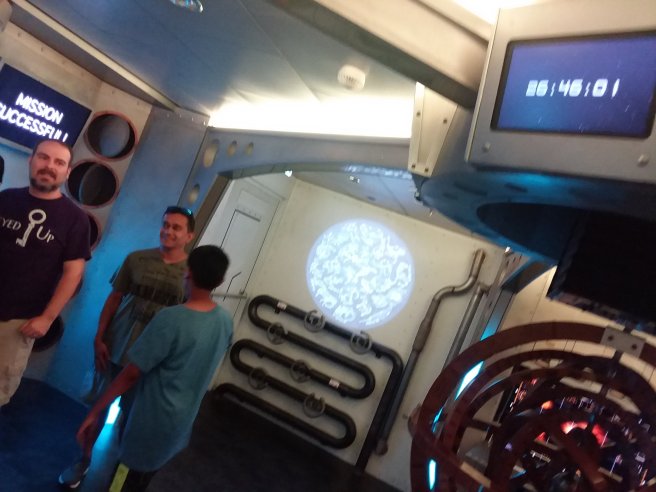 An after room candid that somehow made its way onto my phone. Gives nothing away other than my phone’s penchant for blurry photos if you’re not careful.

Escape the Rubicon really exceeded our expectations! We’d heard it was a fun time, but a lot of folks were wary of just how good an escape room could be on board a cruise ship. I can tell you in our experience, it can be very, very good. Luckily, during our initial briefing, we were able to get to know our escape mates fairly well, and they seemed like an excellent bunch of folks, which really helps in this room, as it involves almost exclusively non-linear and teamwork based puzzles. The minimum of six isn’t there to make the room profitable, it’s actually required for more than one interaction. The set design itself was fantastic, with a big budget set and loads of places to explore. The room is streamlined as well, offering a roomy, but uncluttered area to puzzle within, which is perfect for a game that requires larger groups.

The game flow was spectacular, with threads that interwove throughout the experience, culminating in big puzzles that allow for everyone to stay engaged from start to finish. In fact, throughout the game, our groups intermixed with each other as we were all encouraged by the game to switch things up to play to our strengths. I can’t remember many other rooms where the “team” I started puzzling with wasn’t generally the group I finished with. It’s quite the feat for a room to naturally encourage each player to interact with each other player in this way, and it led to an wholly satisfying adventure. Puzzles and locks clearly related to each other, so while there were some similar inputs, it was always easy to intuit what went where, even if it wasn’t immediately clear how things paired together. Some of the bigger puzzles were astoundingly satisfying, multilayered experiences that engaged the majority of the team and led to some really enjoyable moments of celebration. The whole experience remains on theme and bolsters the light, but effective storyline.

Apparently the second best time ever! Go beat it!

Not all of the puzzles within the room are required to be solved in order to finish the escape, which was a little disappointing, but for our run, we took the, (in my opinion,) much more entertaining puzzle path. The Game Master and some friends we met on board were able to help us fill in the gaps, but there’s a huge difference between hearing about a puzzle later and actually doing the puzzles. Granted, this could keep a big group busy, but one group is going to eventually be disappointed when the other group finishes their puzzle and the initial one becomes moot. A particular puzzle kept our youngest player entertained, but it boiled down to a ridiculously long run of keys to boxes over and over. I think I counted around twelve to fifteen boxes from one to the next, which is a bit much. We were well happy with our group of nine, but much more than that would’ve been entirely too many. The room itself wouldn’t have been cramped, but the puzzle flow definitely would have strained under that weight. There’s also a slight bit of random, undirected searching, but it doesn’t take overlong.

If you’re taking a cruise with Royal Caribbean, I recommend booking a slot for Escape the Rubicon as soon as you can. It’s such a fun game, and you might even make some friends on the ship as well! A small word of advice if you’re anxious about a maxed out group: try booking while docked at a port you aren’t intending to spend much time at, as those days tend to run slimmer. Reservations can be booked online beforehand through Royal Caribbean here (obviously you’ll need to be booked on one of the participating ships first,) and if you’re interested in visiting Puzzle Break’s website as well, you can find that here!