Price: From $35 per person (Private games are available on a sliding scale, see website for more information)

A renowned professor of artifacts was on a dig in Asia and found an artifact he did not recognize. He was found dead in his home a week later. It was a mystery what killed him. In one of his journals it was found that he found out what the artifact was and wanted to be rid of it. He was going to destroy it and burn it so no one would have to be hexed. He wasn’t successful obviously. The details of the hex were specific, if someone comes in contact within the object for 1 hour they would be hexed and meet an untimely fate.

After the high octane terror of City of Ashes, I made sure to book a less scary room for my wife’s benefit, as she doesn’t enjoy pure horror as much as I do. (Though I appreciate that she goes along with it so I can enjoy them.) Hex of the Chinese Jewelry Box promised to be a more straightforward, brightly lit escape room, so it fit the bill perfectly! 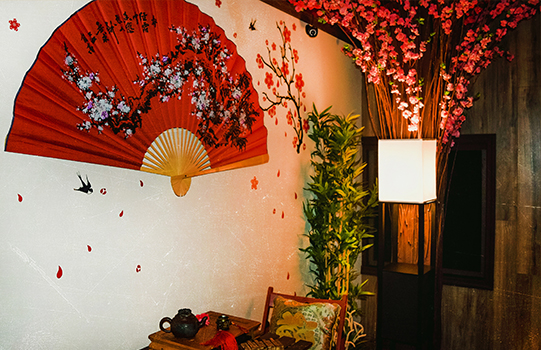 Hex of the Chinese Jewelry Box seemed to be one of the less thrilling rooms on offer from Komnata Quest, but once we began working through the many puzzles on offer during the adventure, I found that it ended up being my favorite room during our New York trip! Displaying the best set of the three games we played with Komnata Quest, the professor’s home was beautifully and convincingly appointed. The set designers for this location do a fantastic job of ensuring players are removed from the Brooklyn office building their rooms are housed in and transported directly into the world of the game. The opening story, delivered over speakers in the room, presents an ominously mysterious vibe to begin the game, and sets the mood excellently. No game clock is present in the room, and it’s absence really ensured we had forgotten about the time limit and were fully focused on the game itself. After playing many games without timers in room, I can really see how this one small change can take the immersion factor through the room, and hope that this becomes more the norm for future games.

The game flow in this room is astoundingly good. There are a few meta puzzles that wind though overlapping stages of the room, and these help ensure that progress is tracked intuitively, while also giving players a steady jolt of satisfaction as the meta puzzles are slowly being completed. There’s definitely a rush that is felt every time a new, recognizable part of these long term puzzles are found, and the feeling of excitement is comparable to the wonder of discovery I felt during my first escape rooms! One of the late stage interactions presents a puzzle that is pieced together over the course of three distinct stages, and is amazingly satisfying to solve. Though we initially thought this would be a time sucking process puzzle, it ended up being one of the most memorable moments of the game. It wasn’t the only memorable moment, however, as Hex of the Chinese Jewelry Box is filled to the brim with magical moments of mysterious tech, satisfying moments of revelation, and a great climax that provided an excellent ending that celebrated our win fantastically.

There is quite a bit of searching to be done within this room, and while it generally isn’t too egregious, another puzzle rather than a hidden object is always preferable. That being said, Komnata Quest has somehow found a way to make most of the scavenging within this room pretty enjoyable, so it’s a very small critique. The room is plenty exciting to puzzle through, but we were hoping to learn about more about the mysterious artifact along the way, unfortunately, however, after the initial story is given, it doesn’t really develop further.

Hex of the Chinese Jewelry box is an amazing game, full of well clued interactions, intuitive connections, and great design all around. I wholeheartedly recommend trying it out if you find yourself in Brooklyn, as it presents a game that’s highly approachable for newcomers, yet was able to elicit that excellent sense of discovery and wonder that only the best escape rooms are able to provide. Book your time searching for the cursed artifact here!