You and your fellow detectives are summoned to an abandoned house. Never wanting to turn down an unsolved mystery, you arrive at the house. Suddenly, you hear screams and see that the entrance has shut behind you. What’s happening here? Will you be able to crack the case and find your way out of the house?

Though we weren’t overly impressed with The Catacombs of Horror, I was interested to see how one of the standard new releases would play. This one hadn’t quite released in the US yet, but for my birthday, my lovely wife procured a British copy for me, and we soon got cracking!

The House of Riddles plays out very straightforwardly, leading most of the puzzles within to be highly intuitive, and allowing for connections to be made through the game flow. The props were highly tactile, and most of the game presented us with conundrums that we would work through using physical pieces of the puzzles. The illustrations throughout the adventure are colorful and inviting, and use this to the game’s advantage by drawing the eye to excellently integrated clues. Perspective is played with in clever ways, and many points of the game present some excellently satisfying solves.

The House of Riddles is one of the easiest Exit: The Game entries, and is therefore a great game for families or new players. The linear nature of the game allows for players to be walked through the experience a little easier, and while there are still tricks to certain puzzles, encouraging players to think outside the box, there is no real need for previous experience with this sort of puzzling experience. Some of the more challenging Exit games definitely require at least passing familiarity with franchise tropes, but luckily this is a great first step for beginners. 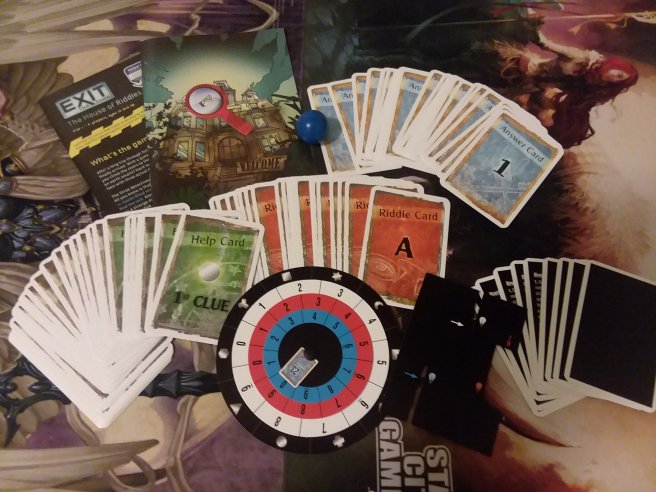 Lots of fun props and a little ball to keep away from the cats!

The House of Riddles is from what I’ve read, one of the first if not the first Exit game released in Germany. If that’s true, it does show in practice, as the game is rather basic on the whole. This is not necessarily a bad thing, but folks who’ve had a bit of experience with previous Exit games will find this particular game very easy. New players might not mind this as much, as this makes the game more approachable, but overall, this game isn’t quite as excellently fine tuned or challenging as others in the series. The story is overall pretty strange, being a fairly loose excuse for the player to be stuck in a giant escape room house. The climax is mostly random as well, and there isn’t much in the way of stakes. The most difficult puzzle is only difficult due to an erroneous clue that serves as a rather large red herring, throwing us off due to the placement of an illustration. We had the right idea, but the clues specifically led us off track. The game is also vastly linear, ensuring some puzzles that require solo work to become major choke points. Especially if your teammate is very precise with their cuts. So very precise.

The House of Riddles, despite being the earliest Exit game, is good fun. Experienced players will blow through it fairly quickly, so veteran players might want to skip it, however, new players will get a great introduction to the series via this game. I personally recommend giving it a shot if you want to scratch the home escape game itch, but your mileage may vary. Overall, I think hardcore enthusiasts will find it an overall fair to middling experience, but new players will love it. We enjoyed our time with the game, but I personally think it was weaker in the challenge department. You can pick up a copy from your friendly local game store today. We recommend checking out The Gamer’s Armory in Cary, NC, check out their website here!