Not even a hard boiled private detective is safe from the things that go bump in the night!

Renea Evans’ dream home suddenly became a nightmare when she began seeing apparitions and receiving terrifying messages. Convinced that her new home is haunted, she’s asked Sullivan to investigate. If he can figure out the ghost’s identity, Renea hopes that she can make it move on before she loses everything she’s worked for. Can you help Sullivan get to the bottom of the ghost’s otherworldly messages before Renea is forced to abandon her home?

It’s time again for another spooky Sleuth Kings case! Last year’s case, The Beast Within, was excellent, and this year’s case promised to be even creepier than the last! Joining Sullivan in investigating a haunted house sounded like the perfect case for October, and we were excited to get started!

I really love the presentation for this mystery, as all the clues and items included are appropriately spooky, and tie into the Halloween theme extremely well. Even the codes give off an aura of supernatural mystery! The beginning of the game starts out very strong, with a deceptively challenging opening puzzle, which gives way to a few less devious enigmas before ramping back up again and into a fantastic and truly satisfying meta puzzle that was loads of fun to tackle. All layers of the game flow tie well into each other, joining together clues in an intuitive way, and ensuring that sign posts throughout the game are well positioned, but are subtle enough that they don’t make it too simple. The codes are varied, and are presented in such a way that multiple people can work on them together, preventing any choke points during the game that would prevent others from having something to do as well.

The best thing about The Haunting, however, is absolutely the story. Filled with spooky details, Sleuth Kings expertly turns up the tension as the haunt becomes more and more active within the house. Without giving anything away, I’m impressed with the direction the story takes, as it twists and turns towards it’s awesome conclusion. This is one of those cases that absolutely kept me guessing from start to finish, and it was great to see the box end on such a satisfying note. The epilogue helps fill in the gaps as well, and does a great job of wrapping the whole case up with a very neat bow. I’d love to see this side of the Sleuth Kings universe explored more in the future, as I think there are several interesting and mysterious paths that could be taken from here. 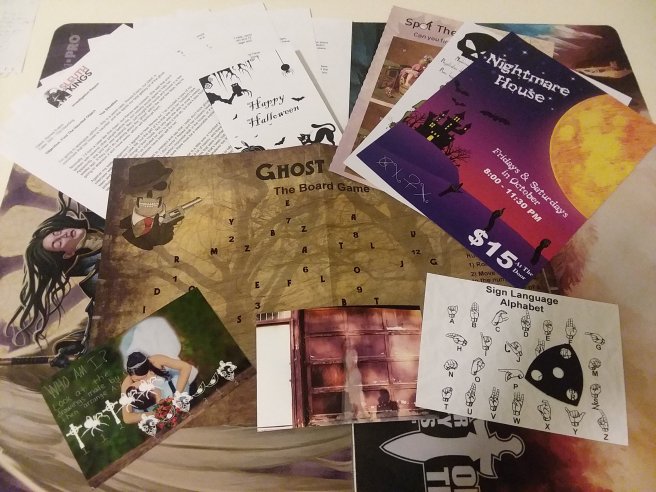 Spooky Sleuthing for Sullivan and his Sidekicks!

The difficulty curve was definitely a little uneven, bookended by some serious challenges. Though they’re all really fun to solve, newer players might be somewhat discouraged by the initial roadblock. Once we were able to overcome that speedbump, (and it was eminently solvable, it just required a good bit of thinking,) the next few solves fell quickly into place, so it isn’t a huge problem, this case just tended to be a bit more difficult to start out, giving the easy wins later in the game rather than earlier.

The Haunting is definitely another of my most favorite Sleuth Kings mysteries so far. The bold direction of the story, the twists in the mystery, and of course, the astoundingly enjoyable and challenging puzzles included make this one an incredible adventure! I definitely recommend checking it out, especially if you’re in the mood for some spooky puzzling. You can purchase this and other previous cases from the Sleuth King’s archives here, and if you’d like to subscribe to upcoming adventures, you can use the promo code ESCAPEADVENTURE to get $5 off your subscription here! You can also read the rest of our Sleuth Kings reviews here!