How is it working at the Haunted Roller Coaster?

It has it’s ups and downs. I’ll see myself out.

Dark corridors, terrifying shrieks, bone-chilling monsters — sounds like a lot of fun, right? At least that’s what you thought when you decided to take a ride on the haunted roller coaster at the amusement park. But suddenly you are stuck in a really freaky place. The ride’s gates are locked tight in front of and behind you. You stumble upon a strange riddle. Can you summon up all your courage to solve the riddles and escape the haunted roller coaster?

The newest Exit game’s box art really called to me, with it’s spooky yet colorful cover and promise of supernatural haunts. Even though it promised to be an easier game, (2 out of 5 on their difficulty scale, which is generally less arbitrary than most,) I was excited to give it a shot, as sometimes the easier games can still be enormously clever. At the least, I was looking forward to a creepy time escaping from things that go bump in the amusement park! 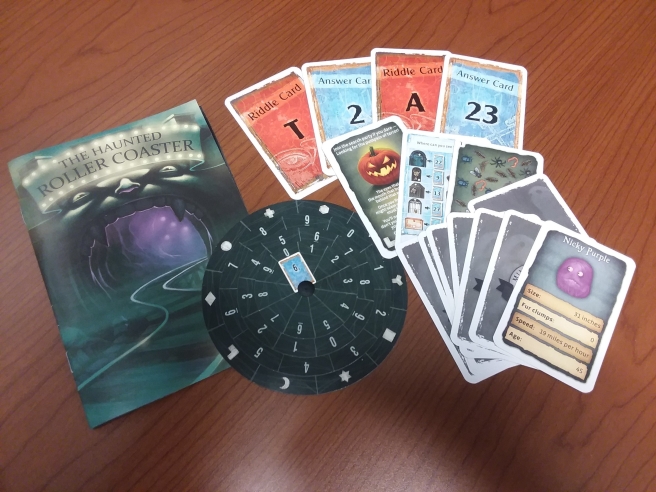 While a linear experience, The Haunted Roller Coaster still presents a fun challenge that can handle more than a solo player. As a couple, neither of us felt as though there was nothing for us to do, and each step of the puzzling process was engaging. The vast majority of the box, in fact, felt incredibly clever, with some amazing and tactile puzzles and interactions peppered throughout. This box might be one of the most densely packed Exit games, prop wise, and I absolutely loved every new surprise that the experience threw at us. Even after twelve other Exit games, this one was able to use parts of the game you generally wouldn’t expect in new and creative ways, keeping even veterans of the series like us on our toes. Two items in particular were amazingly well hidden, and eluded my nosy poking around that I usually do before we begin. (Pro tip: Never start our escape room briefing within the room. I am notorious bad at not immediately looking for clues and have to be reined in by one particular teammate. If he’s not there, all bets are off. I have a problem.)

The game itself gives off a playfully spooky vibe, and while still full of the supernatural fun we expected, never veers into anything too creepy, keeping the mood light and entertaining for the whole family. Some of our favorite puzzles were incredibly inventive, and used their props to the fullest and providing some fantastic moments of revelation that kept us happily puzzling at a good clip, but was never too simple as to allow us to blow right through. The game flow was excellent, and coupled with a smooth difficulty curve to provide an experience that never fell prey to choke points or obtuse frustration. There were also some great easter eggs for veteran players, calling back to other boxes in unobtrusive ways, which is always fun to see.

There was one puzzle that involved a small bit of outside knowledge, and while we think that it will generally be a non-issue, there could be some players that are tripped up by it, depending. The story starts and ends with the opening for the most part, and it is never really clear as to the whys. For instance, why were we trapped in the haunted roller coaster? It seems there was some sort of plan, but it is never explained. Why are we escaping and what are the consequences of escaping or not? Also, no details are given through puzzle solving, and the ending, while cute, doesn’t quite satisfy, as everything remains mysterious.

In all, The Haunted Roller Coaster is definitely one of Exit: The Game’s best experiences. While one of the easier games, and therefore a great one for new players to start with, there is enough creativity within the puzzles that veteran solvers will certainly remain entertained. I absolutely recommend giving it a shot, and look forward to seeing what Thames and Kosmos comes out with next!