In medieval times, most kings had a court jester to entertain and amuse them. On the night of the annual Masquerade Ball, King’s Court Technologies discovers it has its own jester. While most of the partygoers are dressed in masquerade attire complete with mask and beads, one mysterious character is seen dressed in a fool’s motley and a jester’s cap with bells. However, this jester’s purpose is not to entertain but, rather, to exact revenge on the king’s behalf. Who is this jester and why have they murdered three company employees on the roof? What has really been going on at King’s Court Technologies? Unmask The Jester and find out!

Hot off the heels of the phenomenal The Dark and Stormy Night, we were thrilled to see yet another incredibly creative theme in The Jester. The Deadbolt Mystery Society has come up with some very interesting stories thematically, and the puzzles don’t slouch on the job either, so we’re always interested to see what new crime has landed on our doorstep each month.

The Jester is definitely one of the more challenging boxes we’ve done, and though some of the long run time of this mystery was taken up by our quest for a particular office supply that had gone missing, it still took us a bit longer than usual to crack this mystery. This is not a bad thing however, as this box is full of mind bending conundrums and perplexing enigmas. One of my favorite parts of this case is the sheer number of suspects. There are quite a few more than the usual Deadbolt box, and this mechanic is handled fabulously, starting out as a seemingly overwhelming number of possible murderers, and paring down intuitively as the case progresses. The story itself is subtle, with clues slowly revealing what is really going on, and the slow burn of discovery is excellently paced out. The mystery of it all was beautifully captured, and the climax and denouement of this adventure were perfect.

The game flow is pretty great, and there are multiple avenues of investigation to head down, allowing for a non-linear solve that’s great for solo or group play. During a couple points, we split up to solve some of our favored puzzle types, and whenever we were stuck, there was always something else to explore in the mean time. There are loads of clever puzzles hidden within the evidence of this box, and it is all presented in the usual excellent fashion of a Deadbolt mystery, with a couple of great new styles of presentation that lent a sense of authenticity to the props. Several of these puzzles are also deceptively well layered, with subtle hints signposting how they connect with each other, and the use of one central item was brilliantly done. One of my favorite puzzles was a real conundrum, but was presented simply, and provided a wonderful moment of revelation once the simple, yet effective clue came into focus, shattering all the theories we developed while over thinking things. 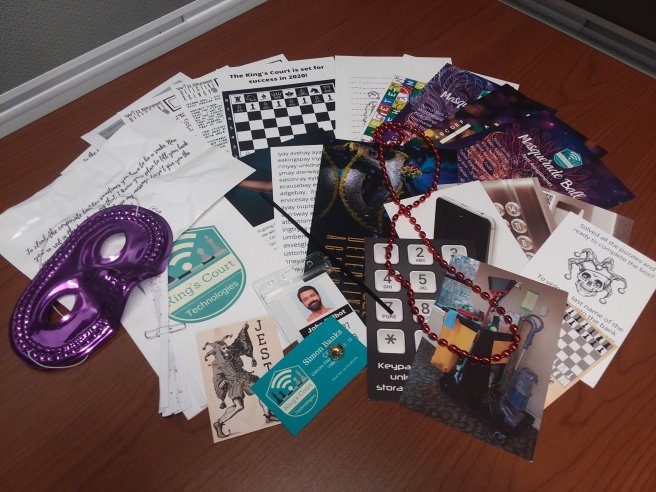 Though we really enjoyed the expanded suspect list, the experience lost that close up examination of the suspects themselves, and therefore we never got to enjoy the wild personalities that show up in many of the Deadbolt cases we’ve worked. While the epilogue delves into the personality of The Jester themselves, I missed getting a look into the mindset of the suspects during the case. One particular puzzle can be rather confusing, and needs a little more cluing in order to allow players to sort out what’s important, what isn’t, and how what is important should be organized. This particular puzzle eventually made sense, but only after a fairly big logical leap was made. The same goes for a particular code that is explained in fairly vague terms, necessitating a fair amount of guess and check before we landed on the most correct answer.

The Jester opens The Deadbolt Mystery Society’s 2020 slate of boxes fantastically, and continues to set a great tone for the mysteries of Valley Falls. As usual, I am looking forward to their next mysteries, and cannot wait to see what this year of sleuthing brings! The Jester is a challenging box, sure to test veteran Deadbolt detectives, but is imminently approachable for new players as well, leaving subtle clues to direct players along in their investigations. I definitely recommend checking it out when you can. Join the Deadbolt Mystery Society here! Right now, you can get 30% off your first box with the Promo Code ESCAPE30! You can also see the rest of our Deadbolt Mystery Society reviews here!

One thought on “The Deadbolt Mystery Society – The Jester (Review)”