Watching some good friends screaming “Let me out!”

In 1925 our city of Statesville had a devastating fire that nearly leveled three city blocks. The fire was started when the hidden still at Key and Co exploded after being left unattended. The owner of the still had been nabbed by police and no one was able to find the hidden valve key to release the pressure from the still in time to save our city. Your escape room adventure entertainment begins as your team is selected to travel back in time to prevent the explosion. We have built a time portal machine and have the opportunity to send your team back in time for only one hour to try to save the still and our city from ruin. The pressure is on as you race the clock.

We’ve been planning on making a trip out to Key to Escape for a good while! Though we intended to go a full year ago, our schedule just didn’t work out, but this year, it was the first spot we put on the docket! After hearing so many folks rave about their rooms, we were sure this was an experience we would not want to miss. Not only that, but this would be my 300th room, which the owners of Key to Escape made even more exciting by presenting me with an Escake! 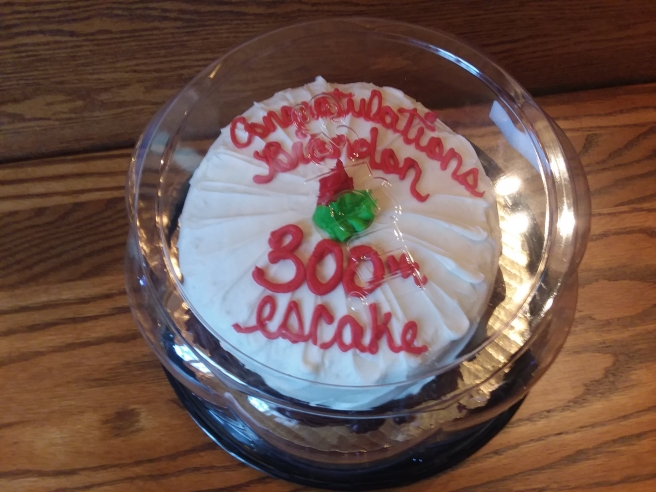 It was red velvet, for the curious.

Under Pressure displays some excellent set design that truly ups the ante for escape room immersion going forward! Though it is housed in a smaller space, everything is used to the fullest, and nothing feels out of place or anachronistic. The speakeasy is extremely well appointed, with so many fantastic props and design touches that evoke the feel of the 1920’s, and the historical building that Key to Escape is housed within is utilized in amazing ways. A myriad of hidden secrets are incorporated into the design, and we were constantly amazed at so many of the reveals. So much practical design work has been done in this room to truly simulate the sound, sights, and intensity of a still that’s about to blow, and it really did keep us under pressure for the full time! Though we didn’t use it, the hint delivery system is completely in theme, as with the rest of the room, and it’s obvious that no corners were cut in the creation of this amazingly designed experience! The soundtrack is a real treat throughout the room, and the awesome into and fantastic climax bookend the adventure perfectly.

The game flow was mostly non-linear, and our team was almost always engaged with one puzzle or another for the full experience. There’s a great mix of mechanical, hand built puzzling and well hidden technical wizardry going on throughout the room, and there are just so many intensely clever enigmas within! One of my favorites takes the usual escape room maze, flips it on it’s head a bit, and tasks players with some deductive reasoning rather than standard, everyday maze solving. There are others that make code breaking feel fresh and new, with some cool twists on the theme. Any included locks feel completely convincing for the in game universe, but the majority of the game forgoes traditional locks for much more interesting interactions and tactile puzzle solving. The story is historically interesting and very well implemented, and though the mission not overly complex, completing it is a fantastic challenge! The difficulty curve is not insurmountable, however, and the cluing and signposting is well implemented in order to prevent frustration. It truly took our whole team working together to solve this one, and there were conundrums to satisfy all types of puzzlers!

Later stages of the game were housed in really cool areas, but unfortunately were a bit smaller, creating a choke point that made it so not all players got to check these awesome areas out. While there were a few teamwork puzzles that got others involved, it did dampen the later stages for some of our team. The soundtrack was awesome, but from time to time, it did get rather loud.

We’ve escaped a few speakeasies in our time, but this room takes (and gives) the cake! With a set design and ultra clever puzzles that are absolutely to die for, Under Pressure absolutely delivers an astounding escape adventure! I highly recommend checking this room out if you’re in the area, as it will give enthusiasts an engaging challenge while still presenting an approachable run of enigmas that will give new players one of the best intros to escape rooms they could ever hope for. Book your time solving the clues while under pressure here! Also, at the time of publication, COVID-19 is shutting down escape rooms everywhere. Key to Escape has created I’m Bored/The Game for at home play, and if you’d like to support them and receive this experience, you can here!

2 thoughts on “Key to Escape – Under Pressure (Review)”