The 80s, Lovecraftian horror, what’s not to love?

The year is 1986 and young Billy Royce has disappeared.

His parents called the local authorities, but after learning that Billy heard things in the walls and planned to go on a quest into a life-draining dimension to save a creature called a Planetar from a monster known as an Illithid, they concluded that he was merely on this “pretend” quest and would return in a day or two.

That was over a week ago and his parents are desperate, so they hired your team of paranormal investigators to find him – and if there is any truth to what he said – then to do whatever it takes to bring their son home before he disappears into the Nether forever.

The moment you step into Escape-topia, you’re transported into (your game host) Mother’s twisted domain, modeled after a spooky hotel. The staff stayed in character during our rooms, and I can definitely say that Mother and her Head of Housekeeping are incredibly hospitable and would love for you to stay as their guests forever. Which is fine with us, that means free escape games for life, right? They also have a pet Illithid you can have a picture taken with, which is a great bonus! 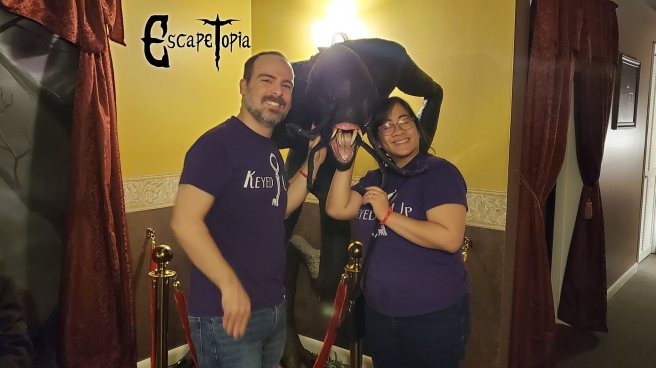 Aside from the immediate immersion, there are some great hidden easter eggs throughout Mother’s dimension, referencing other spooky entertainment, and one easter egg in particular is more than worth tracking down! I won’t spoil what they are here, but if you are able to give Escape-topia a visit, make sure to have a look around the lobby for some hidden clues! The set of Escape the Nether is just as well designed as the lobby, and being in the room really feels like stepping back into the 80s. With some awesome nostalgia sprinkled in, as well as a cool Stranger Things vibe that stays a small homage, rather than a rip-off, this room is awesome from the word go. As we delved further into the Nether, we found that there was an amazing dichotomy between each level of the game, and the sets and puzzles showed this off beautifully. Props within the room are highly tactile, and one particular puzzle I was immediately enamored with, then slightly frustrated by, but ultimately loved, is an awesome little puzzle that requires making some great connections, and receiving enormous amounts of satisfaction as it slowly begins to slide into the correct places. Tying all these excellent touches together is a wonderful soundtrack and a couple cool lighting and practical effects that elevate the experience from an escape room to a full blown adventure!

The game flow within the room is fantastic as well, and we never felt completely stuck on any one thing. Connections between clues and puzzles were well implemented, and every puzzle we came across felt as though it belonged within the universe of the room. There are a good mix of interactions within, and different types of puzzlers will all find something to love during their adventure. My wife and I took on this room as a two person team, and our differing skill sets worked well as this room is very challenging and requires excellent teamwork throughout! The challenge is very fair, but will put even the most experienced groups to the test. Strangely enough, though I’m fairly certain there is a timer within the room, (somehow I forgot to notate this, but I’m pretty sure,) I didn’t feel myself checking the clock like usual due to the enrapturing nature of the puzzles! Most of the interactions require some form of teamwork, and when there are ones that can be solved solo, the game takes a somewhat non-linear branch to ensure everyone remains engaged. I cannot wait to see where Escape-topia takes their story line next, as the narrative within this room evolved excellently, and seemed to end on a cliffhanger, leaving us wanting more in the best way possible!

There were a few unclued hidden objects, and we got into the groove of looking high and low for them, but it’s always more fun when hidden objects are clued by an enigma in the room. The ultimate puzzle was really cool, but we had some mechanical issues that made it harder to keep in place and unlock what we needed. The set piece for this puzzle was also really beautiful, but it did feel fairly finicky on the dials we needed to set, and there was a bit of fiddling we had to do once we had everything otherwise in place.

Enter the Nether is a fantastic game, and we enjoyed every second of this challenging experience. The immersion here is second to none, and I can tell that the staff really loves what they do, from the performances of Mother and her staff, to the beautifully designed rooms and lobby, everything is absolutely wonderful. Their most challenging game is great for escape veterans, and though I’d recommend getting a room or two under your belt before taking this one on, I believe that new players will still love the experience, especially if they aren’t too proud to take a clue here and there. I highly recommend making a trip out to Escape-topia, where you can Enter the Nether yourself here! Give our regards to Mother!

One thought on “Escape-topia – Enter the Nether (Review)”