Kara’s Note: This was *totally* written by Brandon. 😉

Editor’s Note: It was not.

Location: Your Home via the Magic of the Internet!

Prepare for The Descent

Social distancing and/or unable to visit us? We will bring the horror to you!
The Amsterdam Catacombs now invites brave and foolish investigators into its dark depths in the form of a live video online experience.  Virtually connect to your friends and our actors and immerse yourself in this theatrical online horror escape room. Are you willing to face your fears and unravel the mystery of the demonic forces that shelter beneath the church?

I was impressed and surprised to hear that “The Catacombs” would take place in an actual basement of a cathedral. I had some reservations about doing the room due to the scary factor, but I had heard really amazing things about it, so I gritted my teeth and carried on!

It’s probably no secret that I am not a fan of horror-themed games (despite how many I end up playing), so it’s a good thing I had a chance to do this room virtually because I would definitely never ever be doing it in person. It was a scary experience even without actually being in the room, and I can only imagine how useless I would become if I actually were doing it in person. (As a disclaimer, I should mention that apparently I was the only one of my teammates actually affected like this, so it “wasn’t that scary” – still, I beg to differ). But, I do think my reaction speaks highly of how well Logic Locks did in creating an immersive experience.

Immersion into the game started from the beginning, as we were dropped into the streets of Amsterdam and given a nice introduction to the area as well as the cathedral and the lore of the game. It’s definitely helpful they had the basement of a cathedral to naturally instill some ambiance, but even without it, I think Logic Locks would have had no problem on their own building a great set from whatever space they were given. It’s clear how thoughtful their design was, as the space seemed very creatively used and filled with a lot of thematic props and elements that were a visual adventure on their own. The auditory elements added great touches, and definitely enhanced the atmosphere and story effects that the game elicited.

In addition to the set, our avatar did a great job of developing a rapport with us, making us feel involved and that we really were on this journey with him. He really helped set the tone for the game and was a very believable and natural character. (Also, I would just like to take this time to give a shout-out to all the in-person avatars/staff/game masters out there holding up cameras for 60+ minutes and having to maneuver around rooms and do puzzles while managing our ability to see into the rooms. We appreciate you!)

The different conundrums we were faced were expertly woven into the game’s set and theme, and really drove the story forward. It created a smooth flow of puzzles, and their linear nature helped things from being overwhelming. There was a lot of moving parts and interactive elements with the puzzles and game effects that were really neat to see played out (especially from a virtual distance ;)). They all seemed to be unique from each other, and there was a good mix of difficulty in our solves. 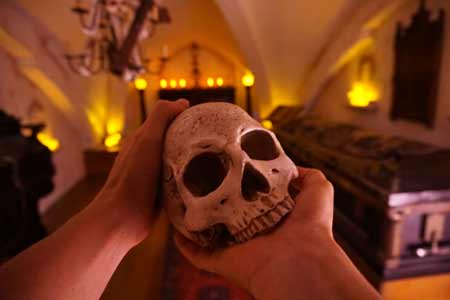 While our avatar was great at guiding us through the game, there were one or two instances in which some teammates noticed that he was a little too helpful with the puzzles. In these times, our avatar took a bit of initiative in completing a solve or working out a puzzle based off very little prompting/stream of consciousness thought from us. Certainly, this makes absolute sense for the longer process puzzles to do this once it’s clear we know how to solve it, but there were some leaps the avatar made that made us wonder why he did something. Of course, this type of approach may be more preferable to some groups more than others, and it might not always be clear when a group is actually directing a solve vs. word vomiting (for lack of a better description), but just something we noticed.

Given the location of the game, it is unsurprising that we had just a couple of connection issues with our on-site avatar, but overall not too bad.

This game was definitely an experience, and I would highly recommend anyone who isn’t too horror-adverse to check it out. Even though we played it virtually, Brandon is still excited to play it if we are ever in Amsterdam, as there seems to be some additional interactive components available in-person. I’ll leave it to him to experience those though. 🙂 Book your time in the Amsterdam Catacombs here!