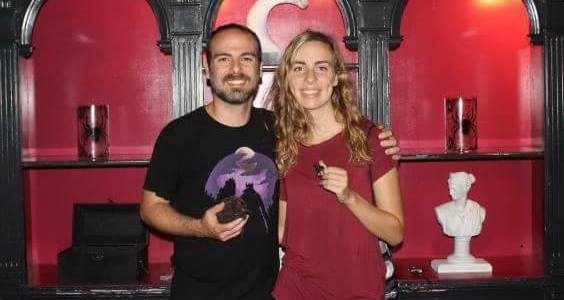 Y’know, after the death of husband #3, you’d think she wouldn’t be so alluring…

The Black Widow is a notorious alleged serial killer whose previous three husbands have all died under mysterious and violent circumstances. Her fourth husband has recently gone missing, and though the police have nothing so far, they’ve hired your group of private investigators to break into her home and find out what happened. Uncover the truth quickly, though, as you don’t want to get caught in her web!

The Black Widow’s home is lovely, and eerie, with signs of her subtle madness hidden throughout the room. As always from Escape Quest, the attention to detail and production values are wonderful and immediately immersive. Rooms feel nothing like the usual converted office spaces, and help transport you into a new space while telling their stories.

Along with the immersive and beautiful room, comes a slew of thought provoking puzzling. Each item leads from spot to spot, but in a subtle way, allowing for quite a few moments of revelation. While building toward the meta puzzle, new revelations are found, and each step is satisfying in it’s feedback when solved. All details of the room are woven into the puzzling, and finding small details or prop interactions were very enjoyable. The reveal near the end is exciting, and the climax feels appropriate and fun. One puzzle in particular is tactile and feels great when solving, but also helps build a creepier atmosphere once it has been completed.

We accidentally skipped one puzzle, which was optional, but became a sort of an unintentional red herring for us near the end. The solution for a couple puzzles felt a bit tenuous and in one case, we found that a certain puzzle was used twice in different ways, which was fairly unusual.

Black Widow was our final room during our DC trip, and I couldn’t have asked more a more enjoyable experience for our capstone. This adventure left me wanting more, and I cannot wait to return to Escape Quest to see what they can cook up next. As with all of their rooms, I very much recommend you give them a try. Beginners and Enthusiasts will find something to enjoy here, and I would say that Escape Quest is the overall best company to visit in the DC area, definitely give them as shot if you’re in the area. Book your investigation into the Black Widow here!

We’re bad guys, but we’re not THE bad guys!

As a crew of privateers, you’ve been patrolling the high seas with your letter of marque, taking down enemies of The Crown and keeping a tidy bit of the spoils for yourselves. But your pirate past beckons when you find a rival Captain has commandeered a large chest of gold and jewels for himself. Under the cover of night, you sneak into his quarters with a trusted few in order to take the bounty for yourselves! But be quick, the Captain will return shortly, and he’ll be none too pleased to find you lurking about…

We were told that Captain’s Quarters was one of Escape Quest’s earliest rooms, and though our GM thought we’d be less impressed by this room due to this, we were still wowed by the great production value of this room. There was an exciting soundtrack playing to spur us along, and though this was our 3rd room in a row here, we were energized and excited to continue escaping!

Though this was a strictly linear, Generation 1 room that included limited tech and mostly lock inputs, it fit the theme and remained an enjoyable escape. The room itself was comfortable for our group of 4, and could easily fit the maximum of 6, which is rare for escape rooms, I find. Props were convincing and enjoyable to work with, and puzzles connected well from one to the next. One particular teamwork puzzle was a fun surprise, and searching through the room turned up some entertaining hidden compartments. One thing I very much enjoyed about Escape Quest, was that they took the standard after escape photo inside of the room, using props you’ve found throughout, turning the usual memento into something a bit more exciting.

Some players will be disappointed by the lack of technical items in the room, especially if they’ve recently played one of Escape Quest’s more technology heavy games. One entertaining teamwork puzzle was a bit more well hidden than felt necessary, but was fun once we’d found it. A couple props felt a bit off theme, but weren’t enough to break the immersion. Some puzzles I had seen before, and were, we were told, part of a prepurchased set, so there may be some repeats for Enthusiasts, though the puzzles were well done overall.

The Captain’s Quarters is a fun experience, but is probably best suited for those new to the Escape Room hobby. Beginners will enjoy this as a low-tech introduction to escape rooms, but Enthusiasts will escape quickly, and may have a few repeats in puzzles. I recommend trying this one out if you’re into the theme or are introducing new players to Escape Rooms, but if you’re more experienced, check out the excellent Black Widow, King’s Ransom, or Lost Temple rooms at Escape Quest, which are newer, and should be more challenging for you! Book your heist in the Captain’s Quarters here!

The King has been taken hostage and a hefty ransom has been demanded in exchange for his safe return, but a firm deadline has been set, removing any hope for a negotiation or time to muster a force to find him. As his most trusted advisers, you are tasked with putting together a ransom of gold and jewels before the King is executed, which is sure to begin a long and bloody war!

As previously mentioned in our Lost Temple review, Escape Quest boasts a beautiful and comfortable lobby, as well as an excellent space for briefings. Our experience with GMs here was also top notch, as they provided excellent customer service and help whenever needed.

The room itself is, as we’ve come to expect from Escape Quest, beautiful and highly immersive. In fact, I’d say King’s Ransom is the best looking game we saw while in the area! Progression is linear, but builds in a way as to include multiple teammates and encourage teamwork. Tech is well hidden, and is used sparingly, in order to evoke a sense of mystery. King’s Ransom is Escape Quest’s hardest room, so puzzles are generally a bit more esoteric in their solutions, but were not frustratingly done. Once methods to solving were figured out, there were many ah-ha moments to be had. Props felt overall like they belonged, and were fun to manipulate and use in our puzzling. The story was light, but continued to be uncovered throughout, leading to a climactic and satisfying conclusion to the experience.

One puzzle in particular was very weakly clued, and we the connection between the solution and input was tenuous at best. An interaction we had solved fairly quickly was finicky and required a lot of unnecessary jiggling and guess and check in order to finagle it into the right position. One particular prop felt anachronistic, and confused us a little bit.

King’s Ransom is another great addition to the DC area escape scene, and delivers a more challenging experience for enthusiasts, while still remaining accessible to newcomers as well. I would, however, recommend getting at least a couple rooms under your belt before attempting King’s Ransom. In short, I highly recommend this room for it’s fantastic set design and exciting puzzling. You can help Ransom the King here!

Dr. Dakota James has gone missing in SouthAmerica while on the hunt for an ancient artifact, leaving you, his proteges, to find his campsite and figure out what happened. Unfortunately, you’ll have to act fast, because a nearby volcano is threatening to blow soon, taking the entire area with it! Find out where Dr. James went, and find the treasure before you go missing too!

I don’t know what it is about DC, but it is the land of the amazing escape room lobbies! Escape Quest’s front door leads up a flight of stairs that leads to an excellent waiting area, filled with odds and ends, and a few interesting puzzles to while time away as you wait. Staff is extremely friendly and customer service is top notch here. The briefing room is separated from the lobby and the rooms, which is always a plus, and the briefing itself is succinct and to the point. The room itself was very well done, and felt immediately like stepping into a temple far from Washington!

The immersion factor in The Lost Temple is top notch. Props and scenery feel realistic, and technology inserted within is hidden well, giving a magical feel to some puzzle solutions. Progression is mostly linear, but there are several instances where other puzzles can be solved, so there’s no shortage of things to do while exploring the temple. Puzzles are clever and give satisfying feedback when solved, and are mostly tactile in nature, which is always appreciated. The variety of things to do in the room mix escape room standbys and new interactions in surprising ways, and the build towards the climax of the room is excellent.

One late game puzzle felt a bit obscure in its cluing, but once it is figured out, is enjoyable to solve. The story itself was very front loaded, and while the room does not suffer from it, peppering more story bits throughout would not hurt.

The Lost Temple is one of the best rooms I experienced in DC, and would recommend it to enthusiasts and beginners alike. Despite a couple minor hiccups, it is an extremely entertaining and well thought out experience that will engage veterans and hook newbies into the hobby. Book your time in The Lost Temple here!